Be aware of what’s going on around you or you just might miss something. Andrey Zolin is sitting on the living room couch, stroking his dick, while Jacob is outside, smoking a cigarette on the balcony, oblivious as to what is going on behind him. Andrey isn’t looking for an audience, but moments later, Jacob turns around, sees what’s going on, and starts to stroke his dick while smoking and watching through the glass.

He then puts his cigarette out, goes inside, and joins Andrey on the couch. They kiss while stroking their cocks, and then switch to gives each other a helping hand. Jacob is ready for more, and Andrey is more than willing to get right to it. As Audrey is going to work, feasting on dick, Jacob pushes his head to get that mouth all the way down on his cock, before switching and taking Andrey’s dick down to the base repeatedly. Jacob then gets up, takes his pants off, flips Andrey on his side, and stuffs him. He was ready to fuck and wasn’t about to waste time taking off clothes. Andrey, with his pants around his knees, doesn’t seem to mind as he moans in pleasure.

They finally take off all their clothes so Andrey Zolin could ride Jacob and get that dick as deep up his hole as possible. Jacobs takes hold of his bottom’s waist and watches him bounce up and down on his cock. They then lay side by side, fucking, while Andrey strokes his cock, until it shoots a load all over the couch. They keep fucking until Jacob gets up and unloading into Andrey’s open mouth. 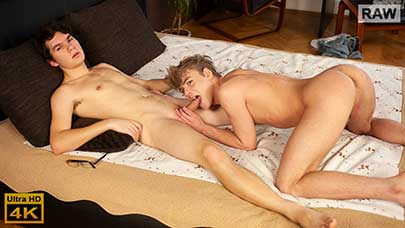 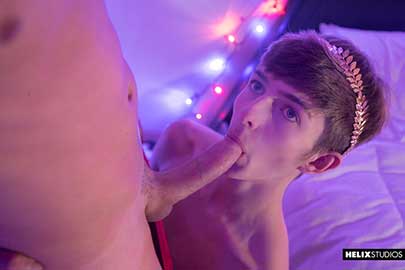